This study aims to define the quantitative, qualitative and spatio-temporal parameters of atmospheric precipitation and the surface runoff of rivers within Dnipropetrovsk region using the example of Samara River. The specified goal is achieved taking into account the problems of keeping and development of the water resource potential in Dnipropetrovsk region. At the first stage the survey analyzes the features of precipitation formation in Dniproperovsk region. The analysis is based on climate data base which includes fifty-six years of measurements by nine meteorological stations. The entire monitoring period was divided into two parts in order to find the trends of precipitation formation. The initial processing allows to confirm that there is a rising of moistening at researched region, spatially from southwest to northwest, and according to the annual statistics the max precipitation shifts to warm seasons of the year. The winter season is characterized by longer period of precipitation, contrary to winter, there is no changes in summer. Moreover, there are the torrential rains in summer and the average rain intensity does not exceed 1 mm per min. The probability of events when the rain intensity is more than 1 mm per min is about 3%. It was taking into account during the simulation. Nevertheless, one can see that rain type formation transformers into tropical one. The next main task of the research was to simulate the surface runoff of Samara River using the tool of QGIS- r.sim.water. The accuracy and reliability of the result correctness were confirmed by actual parameters of Vishnevy stream that placed in the territory of water-balance station Balzata (Moldova). As a result, the series of themes were created. It reflects the distribution of surface runoff parameters within Samara river basin during the warm season. In order to optimize the analyze the authors developed an estimation score system which is based on the influence of anthropogenic factors. Such solution allows to determine that the most problematic (from the “anthropogenic factors influence” point of view) regions are placed in the main river valley and at the southeast part of the Samara River basin. The rest part of the basin is characterized by minor or inessential influence of anthropogenic factors. The main anthropogenic factor that has the highest level of influence on the river runoff is an agricultural activity in the territory of Samara River basin. It affects the transformation time. The highest level of anthropogenic influence is determined in the middle of summer season, the lowest – in spring and autumn. 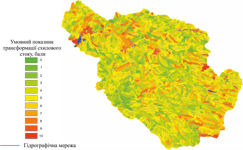