Soil salinity is a characteristic feature of regions with dry and hot climates, where the evaporation processes dominate over the processes of infiltration. Salts in the solid phase of the soil occur almost everywhere, in all landscapes with lack of moisture. A large part of the structure there is a salt formed as a result of crystallization the evaporation of сconcentrated solutions of groundwater. They were formed under the influence of temporal and anthropogenic factors. The mineralization of the soil the individual areas is due to bring salts from the surrounding hills. A common cause of soil salinization is considered process salt weathering limestone, gypsum, halite and other types of rocks. Geochemical monitoring of the territory of the right bank of Dnepropetrovsk was performed in the period 1982 –1990. Chemical analysis of the water-salt extracts the rocks of the aeration zone was executed. As a result of the processing of the data calculated the percentage salt content, determined by their type and degree of salinity. The regularities distributions of salts in the aeration zone were investigated in the study area. Mainly spread and the formation of saline soils is due to geological structure and composition of rocks, depth of occurrence and mineralization of groundwater, geomorphologic conditions, hydrogeological mode and climatic peculiarities. On the territory of the right bank of the river Dnepr were allocated areas of on three factors: geological structure, geomorphologic conditions, type of anthropogenic impact. In areas changes the salt composition of soils of aeration zone were analyzed in eight years the methods of statistical analysis. Also on the degree of salinity toxic salts analysis was carried out in residential and industrial areas, and re-analysis of eight years later. Analysis of the dynamics of water and salt regime of soils of aeration zone in the territory of the city a high level of natural and man-made system has shown that geomorphological zoning is fairly inert factor. It affects the state and variability of rock properties, even when subject to prolonged and intense anthropogenic influences. 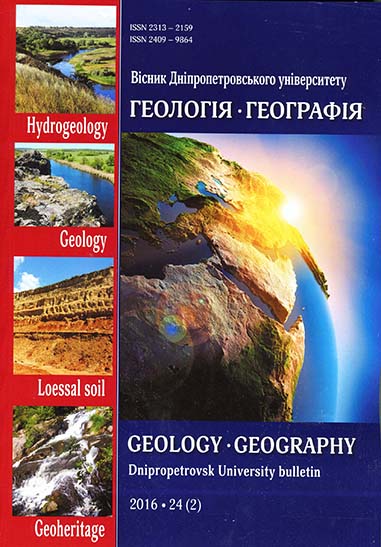